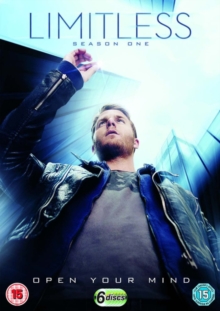 All 22 episodes from the first season of the American TV spin-off of the 2011 movie.

Set four years after the events of the film, it stars Jake McDorman as Brian Finch, a struggling musician who discovers the powerful nootropic drug NZT-48.

With the pill able to unlock the full potential of the human brain and dramatically enhance the user's mental capabilities, Finch is capable of incredible leaps of intuition and reasoning.

While being provided with an immunity shot to counteract the deadly side effects of the drug by the secretive Senator Eddie Morra (Bradley Cooper), Finch uses his increased brain function to help FBI agent Rebecca Harris (Jennifer Carpenter) solve a number of complex and high profile cases.

The episodes are: 'Pilot', 'Badge! Gun!', 'The Legend of Marcos Ramos', 'Page 44', 'Personality Crisis', 'Side Effects May Include...', 'Brian Finch's Black Op', 'When Pirates Pirate Pirates', 'Headquarters!', 'Arm-aggedon', 'This Is Your Brian On Drugs', 'The Assassination of Eddie Morra', 'Stop Me Before I Hug Again', 'Fundamentals of Naked Portraiture', 'Undercover!', 'Sands, Agent of Morra', 'Close Encounters', 'Bezgranichnyy', 'A Dog's Breakfast', 'Hi, My Name Is Rebecca Harris', 'Finale: Part One!' and 'Finale: Part Two!!'.