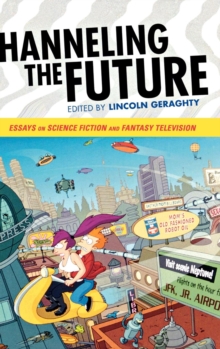 Though science fiction certainly existed prior to the surge of television in the 1950s, the genre quickly established roots in the new medium and flourished in subsequent decades.

In Channeling the Future: Essays on Science Fiction and Fantasy Television, Lincoln Geraghty has assembled a collection of essays that focuses on the disparate visions of the past, present, and future offered by science fiction and fantasy television since the 1950s and that continue into the present day. These essays not only shine new light on often overlooked and forgotten series but also examine the "look" of science fiction and fantasy television, determining how iconography, location and landscape, special effects, set design, props, and costumes contribute to the creation of future and alternate worlds.

Contributors to this volume analyze such classic programs as The Twilight Zone, Voyage to the Bottom of the Sea, and The Man from U.N.C.L.E., as well as contemporary programs, including Star Trek: The Next Generation, Angel, Firefly, Futurama, and the new Battlestar Galactica.

These essays provide a much needed look at how science fiction television has had a significant impact on history, culture, and society for the last sixty years.