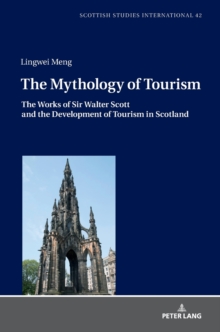 The Mythology of Tourism : The Works of Sir Walter Scott and the Development of Tourism in Scotland Hardback

Scott's influence on Scottish tourism is widely discussed among scholars.

However, only a few have provided a holistic analysis of the relationship between Scott and Scottish tourism from the 19th to the 21st Century in a theoretical framework.

This book reveals how the myth of Scott has been created and appropriated at different stages of the development of the Scottish tourism industry by drawing upon Roland Barthes' analysis of myth.

The study is largely based on an analysis of 110 travel accounts and 48 guidebooks written between the 1770s and the 2010s.

The author argues that Scott's influence on the Scottish tourism industry is strongly ensured by a wide participation of various actors in continuously changing forms.