Scribes and the City - London Guildhall Clerks and the Dissemination of Middle English Literature, 1375-1425 Hardback

"A sensational book... will permanently affect and change the way we see the history of the book in England." Professor Derek Pearsall, Harvard University. Geoffrey Chaucer is called the Father of English Literature not because he was the first author to write in English - he wasn't - but because his works were among those of his generation produced in sufficient numbers to reach a wider audience.

He and his contemporaries wrote before the age of print, so the dissemination of his writings in such quantity depended upon scribes, who would manually copy works like The Canterbury Tales in manuscripts. This book is the first to identify the scribes responsible for the copying of the earliest manuscripts (including Chaucer's famous scribe, Adam).

The authors reveal these revolutionary copyists as clerks holding major bureaucratic offices at the London Guildhall, working for the mayor and aldermen, officiating in their courts, and recording London business in their day jobs - while copying medieval English literature as a sideline.

In particular, they contributed to the new culture of English as the language of not only literature, but government and business as well. LINNE R. MOONEY is Professor of Medieval English Palaeography in the Department of English and Related Literature, and Director of the Centre for Medieval Studies at the University of York; ESTELLE STUBBS is a researcher in the School of English Literature, Language and Linguistics based at the Humanities Research Institute at the University of Sheffield.

The Index of Middle English Prose,... 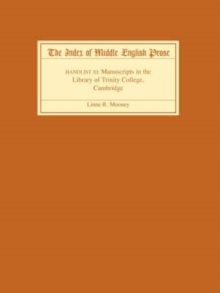 The Index of Middle English Prose,... 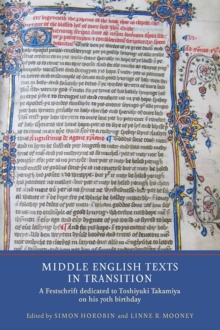 Middle English Texts in Transition - A...