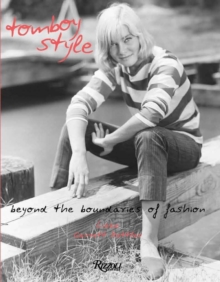 Tomboys are confident, rebellious, and adventurous.

They are bold, brazen, fierce--and sexy. They aren't known for following rules, they are known for doing--and wearing--whatever they want.

Tomboy captures the tomboy's style, her je ne sais quoi, her wardrobe, and most importantly, her spirit.

Throughout the twentieth century, the mass marketing of gender stereotypes meant tomboys cropped up against the odds, trends, and ads.

As menswear-inspired fashions for women have exploded into the mainstream under the helm of designers and stylists ranging from J.Crew to Rag & Bone to Boy by Band of Outsiders, acceptance of both the word tomboy and the women associated with its edge has been set into play.

But a tomboy is not just about style--tomboys are measured in equal parts wardrobe and spirit.

A visual history that chronicles the past eighty years of women who blur the line between masculinity and femininity, Tomboy explores the evolution of the style and its icons.

Vivid commentary illuminates the tomboy's history and captures a diversity of women who are bound together by their inherent ability to seamlessly blend a rugged sensibility with classic, understated elegance.