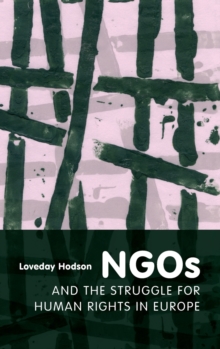 NGOs and the Struggle for Human Rights in Europe Hardback

This publication provides a fresh perspective on the litigation of the European Court of Human Rights by focusing upon the role that non-governmental organisations play in it.

The inspiration for this work was the growing literature that points to human rights as the outcome of political and social struggles.

The role that NGOs play in these struggles is well-documented in the context of other international and regional human rights tribunals, but has been less widely written about in the context of the European Court of Human Rights. The Court is typically subject to legalistic, as opposed to socio-political, scrutiny.

In this book the Court's litigation is re-cast as a site where politically motivated actors attempt to impact upon the meaning that is given to the language of the European Convention on Human Rights and to use the Convention as a mechanism that can contribute to social change. For the purposes of this research a mixture of quantitative and qualitative research techniques are adopted.

These methods facilitate the author's desire to obtain both a de-centred perspective on the Court's functions and a systematic picture of the scale of NGO involvement in the Court's litigation.

The core of this work is primarily based on data obtained from a sample of cases in which the Court had delivered judgment, and a plethora of associated materials, including extensive interviews with NGOs that were involved in those cases.

Ultimately, this book challenges the idea that the litigation of the Court is bound to the idea of achieving individual justice and highlights the meaningful impact that NGOs have on certain important sections of the Court's litigation.