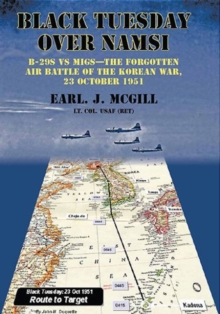 An hour and a half before sunup, nine B-29s of the 307th Bombardment Wing lifted off from Kadena Air Force Base, Okinawa on a bombing mission against Namsi, a North Korean airfield under construction in the heart of MiG Alley.

Five and a half hours later they would engage in an air battle that would forever change the conduct of strategic aerial bombardment.

Six of the nine would not return, the highest percentage of United States bombers ever lost on a major mission.

Astonishingly, virtually nothing has been published about this event.

Official Air Force historical records mention it only in passing and literature of the period too often emphasises the gung ho aspect than the grim reality of war. Black Tuesday Over Namsi chronicles the calamitous B-29 daylight-bombing mission flown by the 307th Bombardment Wing on 23 October 1951 against Namsi Airfield.

What many experts consider the epic air battle of the Korean War and perhaps the greatest jet engagement in the history of aerial warfare has largely become another forgotten battle in a forgotten war.

Here, Lt. Col McGill presents the facts and circumstances of the mission from first briefing to final landing. This book also records, from verifiable historical documents, the broader events and conditions that led up to the confrontation, plus the first-hand accounts of aircrew members and ground personnel who were there.

Allied and Soviet perspectives are examined; statements made by the MiG pilots describe the attack; and eyewitnesses to the event have supplied photographs of the mission and its aftermath, including the aerial photo of the Namsi Airfield that was used to plan the mission.

This thoroughly researched narrative history is enhanced by numerous photographs, a bibliography, and an index to full names, places and subjects. This is the story of the Americans and Russians who clashed in the skies above Namsi, the events leading up to it, Black Tuesday's historical impact on aerial warfare, and, for the first time, fresh conclusions based on a careful analysis of the specific factors that went into the execution of this and other bombing missions.