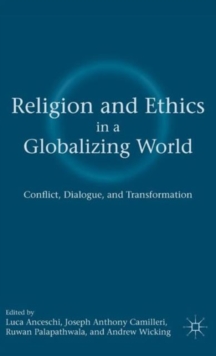 Religion and Ethics in a Globalizing World : Conflict, Dialogue, and Transformation Hardback

Around the world religion is an increasingly vital and pervasive force in both personal and public life.

Though this trend has been widely noted, its long-term implications are as yet only dimly perceived.

Will this be a force for healing or for violence? To express the question to its most dramatic, yet urgent form: can the world's major religious traditions respond constructively to contemporary challenges in the public sphere that are now, by definition, global?

Religion and Ethics in a Globalizing World seeks to address this question, and to contribute to a greater understanding of the role of religion in the paradoxical context of a world that is increasingly unified, but which remains fundamentally plural.