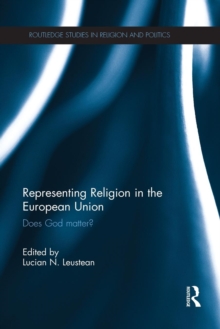 Religious actors are becoming part of the EU bureaucratic system, and their mobilisation in Brussels and Strasbourg in the last decade has increased dramatically.

This book explores the mechanism and impact of religious representation by examining relations between religious practitioners and politicians in the European Union from the Second World War until today.

This book seeks to answer the following questions: How do (trans)national religious groups enter into contact with European institutions?

What are the rationale and the mechanisms of religious representation in the European Union?

How are religious values transposed into political strategies?

What impact has relations between religious practitioners, EU officials and politicians on the construction of the European Union?

Examining religious representation at the state, transnational and institutional levels, this volume demonstrates that 'faith' is becoming an increasingly important element of the decision-making process.

It includes chapters written by both academics and religious practitioners in dialogue with European institutions and will be of great interest to students and scholars of European politics, history, sociology of religion, law and international relations.