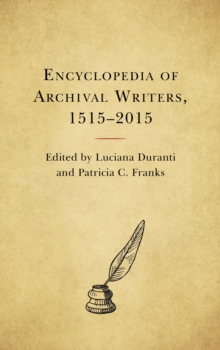 The 144 archival writers from 13 countries who are included in this volume were selected by an international advisory board on the basis of their impact on the records and archives profession and discipline, the presence of their publications in educational programs' reading lists, and the frequency of reference to their work.

Arranged in alphabetical order, each entry includes a biography, intellectual contributions, and a brief essential bibliography.

A total of 113 educators, professionals and students in the records and archives field-55 of whom are also profiled in this Encyclopedia--contributed to this volume.

There is no other book in any language that focuses on the life and work of authors of records and archives literature.

In fact, there is not easily available information on such writers.

Thus, most entries involved quite a bit of research on dead writers and interviews with the living ones.