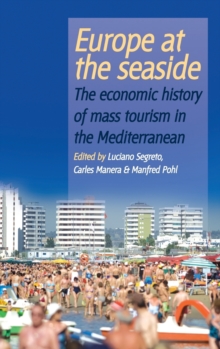 Europe At the Seaside : The Economic History of Mass Tourism in the Mediterranean Hardback

Mass tourism is one of the most striking developments in postwar western societies, involving economic, social, cultural, and anthropological factors.

For many countries it has become a significant, if not the primary, source of income for the resident population.

The Mediterranean basin, which has long been a very popular destination, is explored here in the first study to scrutinize the region as a whole and over a long period of time.

In particular, it investigates the area's economic and social networks directly involved in tourism, which includes examining the most popular spots that attract tourists and the crucial actors, such as hotel entrepreneurs, travel agencies, charter companies, and companies developing seaside resort networks.

This important volume presents a fascinating picture of the economics of tourism in one of the world's most visited destinations.