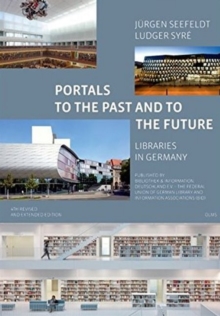 "The advent of the digital era has raised questions on the future course of library development.

The challenge of maintaining a balance between their educational, cultural and service roles has presented libraries with new challenges challenges which their rich and varied media holdings, modern technical infrastructure and information specialist competence well equip them to face.

This fourth revised and updated English edition of Portals to the Past and to the Future by Jurgen Seefeldt and Ludger Syre, now in its fifth German edition, is an in-depth state-of-the art report on current German librarianship.

Lavishly illustrated, the book traces the history of libraries in Germany, portrays the various types of library and cites many examples of the outstanding achievements of nationwide library cooperation in the Federal Republic of Germany.

The reader will gain both a revealing insight into the cultural and educational policy underlying the German library system and an outline of the profession.

Special attention has been paid to current developments such as the preservation and presentation of the common cultural heritage and the emergence of the digital library.

This book has been translated not only into English but also into Arabic, Italian, Japanese, Spanish, Russian and Turkish and is now the standard work on libraries and librarianship in Germany. Because of the interest it has generated internationally, it was decided to publish the German and English versions of this new edition simultaneously.

The book provides trainee librarians and non-librarians alike with a clear picture of the way in which libraries were able to cooperate in the aftermath of the Second World War to overcome the vagaries of the federal system and create an effective decentralized library network more than a match for the challenges of the third millennium."