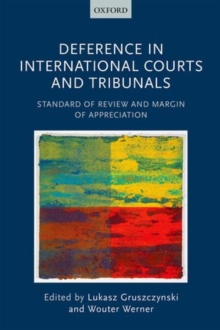 Deference in International Courts and Tribunals : Standard of Review and Margin of Appreciation Hardback

International courts and tribunals are often asked to review decisions originally made by domestic decision-makers.

This can often be a source of tension, as the international courts and tribunals need to judge how far to defer to the original decisions of the national bodies.

As international courts and tribunals have proliferated, different courts have applied differing levels of deference to those originial decisions, which can lead to a fragmentation ininternational law.

International courts in such positions rely on two key doctrines: the standard of review and the margin of appreciation.

The standard of review establishes the extent to which national decisions relating to factual, legal, or political issues arising in the case are re-examined in theinternational court.

The margin of appreciation is the extent to which national legislative, executive, and judicial decision-makers are allowed to reflect diversity in their interpretation of human rights obligations.

It looks in-depth at how the public policy exception has been assessed by the European Court of Justice and the WTO dispute settlement bodies.

It examines how the European Court of Human Rights has taken an evidence-basedapproach towards the margin of appreciation, as well as how it has addressed issues of hate speech.

The Inter-American system is also investigated, and it is established how far deference is possible within that legal organisation.

Finally, the book studies how a range of other international courts, suchas the International Criminal Court, and the Law of the Sea Tribunal, have approached these two core doctrines.