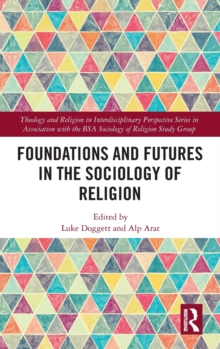 Foundations and Futures in the Sociology of Religion Hardback

Since the sociology of religion became recognised as a distinct sub-discipline over the last century, the dominance of approaches taking their inspiration from the sociological classics has increasingly been challenged.

Empirical findings have brought the notion of secularisation into question; and theorists have sought to deconstruct how we think of 'religion.' This collection appraises the continuing influence of the foundational approaches and places these in relation to newly emerging directions in the field. The book is divided into four sections, each section containing one 'foundational' chapter written by an established academic followed by two 'futures' chapters contributed by emerging scholars in the sub-discipline.

These chapters complement one another by placing the overview of future directions in the context of a survey of the development of the sociology of religion over the last century.

Topics discussed in these chapters include lived religion, sexuality, ritual, religion and the media. Combining erudite examinations of the British Sociological Association Sociology of Religion Study Group's work so far with explorations of the future directions its research might take, this book is vital reading for any scholar whose work combines religious studies and sociology.