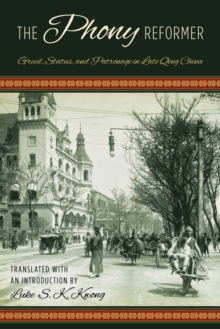 This engaging translation presents an authentic period document that reflects aspects of Chinese life and society as seen through contemporary eyes.

Portraying a "phony" reformer who rode the tide of the Qing court's post-Boxer reform initiatives to career success and personal wealth, this satire conveys the author's hope for a new, improved China, one that could stand proudly alongside Western nations and Meiji Japan in the modern world.

His vivid descriptions of various situations shed light on late Qing elite behavior and Chinese foreign relations capture the clash between tradition and modernity, the old and new, as educated Chinese stood at a cultural and political crossroads.