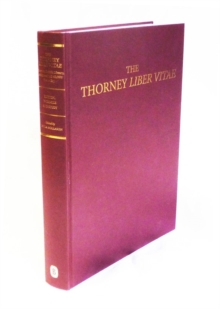 The Thorney liber vitae (BL, MS Add. 40,000, fols 1-12v) consists of many hundreds of names written in the front of a tenth-century gospel book.

Begun at Thorney abbey (Cambridgeshire) in the late eleventh century and continued into the late twelfth, it purports to be a record of the names of confraters of the abbey, that is of those people who, through their friendship and gifts to the abbey, were included in the daily prayers of the monks of the community. The present volume is the first complete edition of this important text, and includes a complete facsimile of the pages.

It also contains studies of the manuscript context, of the names included and, where possible, the identities and relationship to the abbey of those named, many of whom are also entered in the priory cartulary known as the Red Book of Thorney.

The introduction provides a wide-ranging historical context for the production of the liber vitae. Lynda Rollason is Honorary Research Fellow in the Department of Archaeology at Durham University. With contributions from Richard Gameson, John Insley and Katharine Keats-Rohan.