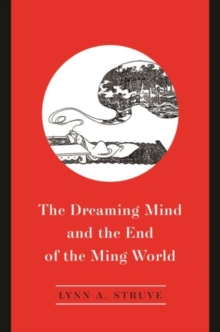 The Dreaming Mind and the End of the Ming World Hardback

by Lynn A. Struve

From the mid-sixteenth through the end of the seventeenth century, Chinese intellectuals attended more to dreams and dreaming-and in a wider array of genres-than in any other period of Chinese history.

Taking the approach of cultural history, this ambitious yet accessible work aims both to describe the most salient aspects of this "dream arc" and to explain its trajectory in time through the writings, arts, and practices of well-known thinkers, religionists, litterateurs, memoirists, painters, doctors, and political figures of late Ming and early Qing times. The volume's encompassing thesis asserts that certain associations of dreaming, grounded in the neurophysiology of the human brain at sleep-such as subjectivity, irrationality, the unbidden, lack of control, emotionality, spontaneity, the imaginal, and memory-when especially heightened by historical and cultural developments, are likely to pique interest in dreaming and generate florescences of dream-expression among intellectuals.

The work thus makes a contribution to the history of how people have understood human consciousness in various times and cultures. The Dreaming Mind and the End of the Ming World is the most substantial work in any language on the historicity of Chinese dream culture.

Within Chinese studies, it will appeal to those with backgrounds in literature, religion, philosophy, political history, and the visual arts.

It will also be welcomed by readers interested in comparative dream cultures, the history of consciousness, and neurohistory.