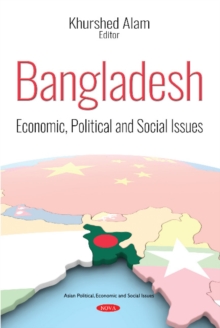 Bangladesh as an independent country started its journey just over forty-seven years ago.

The country is full of possibilities and challenges.

Bangladesh: Economic, Political and Social Issues has been organized around the economic, political and social opportunities and challenges of present Bangladesh.

This book is the culmination of twelve chapters by twenty-four authors.

Their extensive investigation reveals a lot about the social, political and economic context of Bangladesh.

Since its inception, the Bangladesh economy is largely dependent on the agricultural sector.

A good number of authors in this book cover the issue of agricultural sustainability, its achievements, challenges and potentials as well as its extension system.

It also reveals the role of women in the agricultural economy.

The book draws the present political state of Bangladesh in relation to its historical background.

The clientelism, corruption, extremism, secularism and government system of Bangladesh has been discussed widely by another group of authors.

The technological wave of the global civilization of the twenty-first century is surging in Bangladesh with industrial growth and development.

The historical roles of farmers, fishers and other marginal groups are going through a harsh transformation.

This book covers the changing social and economic structure of these communities.

In recent years, like any other country of the world the climate of Bangladesh has changed a lot.

Many adaptation interventions have been undertaken to mitigate the problem.

These adaptation interventions and participatory forest (PF) management programs have been included in this book.

It also moves on to the gender issue in agriculture, where a dominant Muslim normative order is prevalent as well as the considerable amount of violence faced by women.