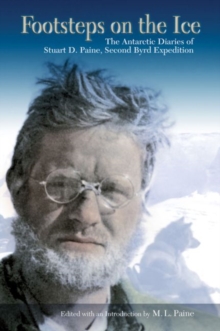 In 1933, Antarctica was essentially unexplored. Admiral Richard Byrd launched his Second Expedition to chart the southernmost continent, primarily relying on the muscle power of dog teams and their drivers who skied or ran beside the loaded sledges as they traveled.

The life-threatening challenges of moving glaciers, invisible crevasses, and horrific storms compounded the difficulties of isolation, darkness, and the unimaginable cold that defined the men's lives.

Stuart Paine was a dog driver, radio operator, and navigator on the fifty-six-man expedition, the bold and complex venture that is now famous for Byrd's dramatic rescue from Bolling Advance Weather Base located 115 miles inland.

Paine's diaries represent the only published contemporary account written from the inside of the Second Expedition.

They reveal a behind-the-scenes look at the contentiousness surrounding the planned winter rescue of Byrd and offer unprecedented insights into the expedition's internal dynamics.

Equally riveting is Paine's breathtaking narrative of the fall and summer field operations as the field parties depended on their own resources in the face of interminable uncertainty and peril.

Undertaking the longest and most hazardous sledging journey of the expedition, Paine guided the first American party from the edge of the Ross Sea more than seven hundred miles up the Ross Ice Shelf and the massive Thorne (Scott) Glacier to approach the South Pole.

He and two other men skied more than fourteen hundred miles in eighty-eight days to explore and map part of Antarctica for the first time. ""Footsteps on the Ice"" reveals the daily struggles, extreme personalities, and the matter-of-fact bravery of early explorers who are now fading into history.

Detailing the men's frustrations, annoyances, and questioning of leadership, Paine's entries provide rare insight into how Byrd conducted his expeditions.

Paine exposes the stresses of living under the snow in Little America during the four-month-long winter night, trapped in dim, crowded huts and black tunnels, while the men uneasily mull over their leader's isolation at Advance Base.

The fates of Paine's dogs, which provided some of his most difficult and rewarding experiences, are also described - his relationship with Jack, his lead dog, is an entrancing story in itself.

Featuring previously unpublished photographs and illustrations, ""Footsteps on the Ice"" documents the period in Antarctic exploration that bridged the ""Heroic Era"" and the modern age of mechanized travel.

Depicting almost incomprehensible mental and physical duress and unhesitating courage, Paine's tale is one of the most compelling stories in polar history, surpassing other accounts with its immediacy and adventure as it captures the majesty and mystery of the untouched Antarctic.