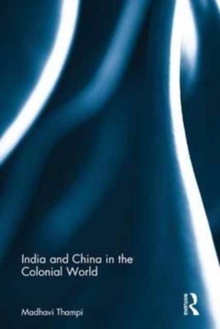 India and China in the Colonial World Hardback

India and China in the Colonial World brings together thirteen essays by eminent Indian and Chinese scholars as well as young researchers who look at the multidimensional interaction between the two countries.

This interaction was of many kinds and took place at various levels.

This volume casts new light on some of the problems that have confronted the relations between India and China as new states and, in doing so, challenges stereotyped images of this relationship.

The major areas of India-China relationships covered in this book include some aspects of the situation during and after World War II.

Some papers, such as those on the importance of Shanghai in Sino-Indian trade, the presence of the Chinese community in India and Indians in China; Indian fighters in the Taiping Rebellion; Gandhi and the Chinese in South Africa; and ties between south-west China and north-east India during World War II; present the findings of new research. Others such as those pertaining to India-China relations in the period, such as the opium trade; the controversial visit of Rabindranath Tagore to China; and the complexity of Subhash Chandra Bose's position with relation to both China and Japan have been put in a new light.

The essays in this book are particularly relevant as they help to understand the relationship between India and China in the context of a historical perspective.