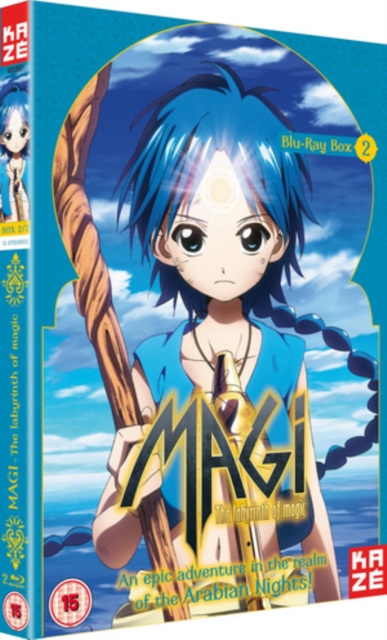 Episodes 14-25 from the first series of the anime based on the manga by Shinobu Ohtaka.

Events are set in a mythical past world where slavery remains in effect and towers of mysterious origin known as Dungeons are the currency of power.

The youthful Ali Baba (voice of Yuki Kaji) is tired of eking a living at the mercy of the merchants who employ him and dreams of conquering many Dungeons to become a wealthy and powerful figure.

His prayers seem to be answered when he meets Aladdin (Kaori Ishihara), a curious boy who claims to possess supernatural powers.

Together, they look set to make a formidable team. The episodes are: 'Alibaba's Answer', 'Cassim's Answer', 'Wisdom of Solomon', 'Smile', 'The Kingdom of Sindria', 'The Culprit's Name is Sinbad', 'The Two Princes', 'Zagan Labyrinth', 'Household of Flames', 'Battle Cry', 'Fall Into Depravity' and 'Alibaba and Aladdin'.