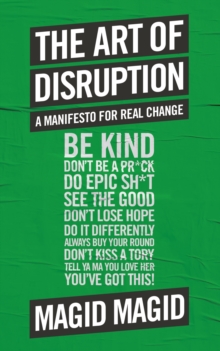 The Art of Disruption : A Manifesto For Real Change Hardback

'Read this book!' Caroline Lucas'My money's on Magid.' Thandie Newton'A man so inspiring you will have no choice but to cast your hopeless lethargy asunder' - Rufus Hound A guide to being courageous and community-minded, and to disrupting and dismantling age-old power structures in work, life and politics, written by someone who has done exactly that. Let's be honest. Magid Magid's story seems an unlikely one. He's a Somali-born black Muslim refugee who became the youngest ever Lord Mayor of Sheffield and one of the last UK MEPs.

Magid has made headlines nationally and internationally for his creative ways of campaigning while not conforming to tradition and being unapologetically himself. Magid had no idea that the poster he dreamed up for a local music festival in 2018 would go viral.

The poster contained the 10 commandments he tries to live by.

He had no idea that this poster would come to represent a movement that has swept him to the heart of local and European establishment politics.

Now, for the first time, he reveals the stories behind each of these 'commandments'; what drives him, the obstacles he overcame and what makes him hopeful. 'His voice and representation are inspirational and a force to reckon with.' Dr Shola Mos-Shogbamimu, lawyer, activist and author'It's easy to problematise the world, but Magid has offered us answers , solutions and even the possibility of a new politics.' Jon McClure, lead singer of Reverend and The Makers'Magid's book could not be more timely.

A must read for anyone who wants to change the world.' Chunky Mark, The Artist Taxi Driver