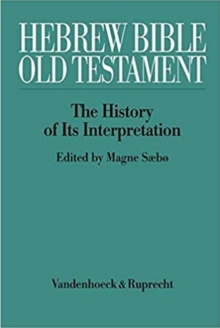 The first part of the project Hebrew Bible / Old Testament deals with questions of the canon with regard to its interpretation from the Jewish, New Testament, rabbinic and patristic view and includes the time until Augustine.

In Volume 2, well-known Jewish, Protestant and Roman Catholic scholars from North America, Israel and various European countries contribute to the question of the medieval interpretation and exegesis of the Hebrew Bible / Old Testament (5th to the end of the 12th century).

Geographically, they cover most of the world known from Renaissance to Enlightenment: from Syria to Spain, from Rome to the Rhine and the Seine.

The penultimate Part III / 1 traces the long and complex history of the reception and interpretation of the Hebrew Bible / Old Testament through the various eras to the particular situation of the nineteenth century, with its new exegetical methods and problems.

Broader historical knowledge in many areas and an expanding cultural context led to the phenomenon that 'history' became the object of an unprecedented fascination; 'History' became the new key concept - partly in the form of 'historicism'.

This in turn led to relatively intense controversy between the opposing fronts.

The indices (names, themes, references to biblical sources and a wide collection of relevant literature) represent the variety of information offered here.