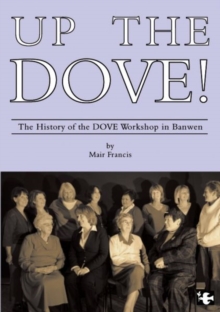 Up the DOVE : The History of the DOVE Workshop in Banwen Paperback / softback

It is important to tell the story of the DOVE Workshop from its birth during the miners' strike 1984-85, through its development as a community education and training resource and effective social enterprise and finally recognised as a 'shining beacon' in the Dulais valley.

The DOVE Workshop was set up by a group of women from the local Miners' Support Group and other women from the valley with a common purpose that strove to save their communities.

They were young and older women who as teachers, factory workers, miners' wives, mothers and homemakers worked collectively to 'break the mould' and establish a centre that would benefit all in the community.

They could only achieve this by working in partnership with other education and training providers from the local universities, colleges, the voluntary sector and the local councils.This model of partnership was disseminated throughout south Wales, the United Kingdom and Europe and thus DOVE was recognised as an example of best practice. This book celebrates DOVE Workshop's achievements through the successes and achievements of the students, tutors and learners who have participated in the venture - without their support the aspirations of the women in 1984-85 would not have been realised.