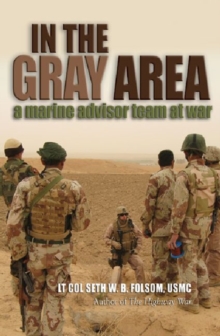 In the Gray Area : A Marine Advisor Team at War Hardback

In the Gray Area is a Marine officer's reflection of his tour of duty as the leader for an advisor team embedded with the 7th Iraqi Army Division, beginning in February 2008.

Tasked with the mission to train and mentor the new Iraqi Army's 3rd Battalion, 28th Brigade, the Marines of Military Transition Team 0733 - the "Outlanders" - quickly found it fraught with challenges.

The bond is explored between Folsom and the fourteen men that comprised his advisor team, as well as the tenuous relationship forged between the Marines and their Iraqi counterparts as they struggled to assume independent control of- and maintain security in - Iraq's western al-Anbar province.

Highlighting the obstacles faced by Marine advisors as they live and operate with an army whose language and culture are so different from their own, Folsom creates a compelling picture of the challenges in working with the Iraqi Army to drive out al-Qaeda. In the Gray Area builds on Folsom's The Highway War, his award winning memoir of his experience as the commanding officer of one of the first companies into Iraq in March 2003.

This new book centres on an Iraqi Army that is more mature and on the cusp of independence from its American partners.

Folsom shows his maturation as a commander as he thoughtfully details the difficulties posed by a possibly premature American departure from Iraq and questions if the advisor mission is really the key to our attempt to exit Iraq. About the AuthorMajor Seth W.B. Folsom, USMC currently serves as the International Affairs Officer Program Coordinator, Strategy and Plans Division at Marine Corps Headquarters.