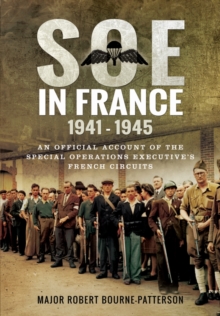 In the archives of the Special Operations Executive lay a report compiled by a staff officer and former member of SOE's French Section, Major Robert Bourne-Patterson, that until recently could not be published. Because of the highly sensitive nature of the work undertaken by the SOE, the paper was treated as confidential and its circulation was strictly limited to selected personnel.

Now, at last, it can be made available to the general public. Limited, also, was the time available to Bourne-Patterson in compiling his report in 1946 as the SOE was being wound up and many documents were being 'weeded' from the files.

Nevertheless, the paper he wrote gives a good picture of the work of the SOE in France, the country where its operations were most extensive.

It contains an overview of operations in France by the Special Operations Executive during the Second World War with detailed records of individual circuits from their inception onwards, containing much information concerning individual agents and their contacts, calendars of subversive activity against the Germans and the names and addresses of personnel connected with the circuits who had survived the war.In writing his account, Bourne-Patterson drew heavily on personal interviews and wartime debriefings by agents.