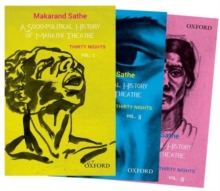 The work is written in the form of a dialogue between a writer and a clown, where the clown goes on to educate the writer, by narrating to him the history of Marathi theatre, taking him through its inception in 1842 to 1985. Originally written in Marathi, this encyclopaedic work would narrate a social history of Maharashtraand of India as seen through the window of theatre.

The narration proceeds through thirty nights, loosely following the structure of Arabian Nights, woven around the question, 'Who am I?' The methodology that Sathe follows is complex but systematic and logical as it is predicated on a soundunderstanding of both history and culture. He views theatre as a cultural construct shaped by the dialectical interaction between the playwright and the cultural political ethos around. The three volumes present the various stages of the historical development of modern Marathi theatre.

The conversations between the writer and the clown take place at night; each night is progressively devoted to the discussion of certain historical stages.