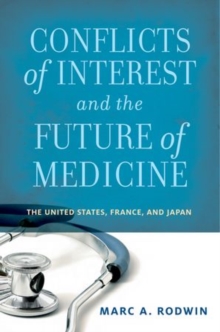 Conflicts of Interest and the Future of Medicine : The United States, France, and Japan Paperback / softback

As most Americans know, conflicts of interest riddle the US health care system.

These conflicts raise questions about physicians' loyalty to their patients and their professional and economic independence.

The consequences of such conflicts of interest are often devastating for thepatients-and society-stuck in the middle.

In Conflicts of Interest and the Future of Medicine, Marc Rodwin examines the development of these conflicts in the US, France, and Japan.

He shows that national differences in the organization of medical practice and the interplay of organized medicine, the market, and the state give rise to variations in the type and prevalence of such conflicts.

He then analyzes the strategies that each nation employs to cope with them.

Unfortunately, many proposals to address physicians' conflicts of interest do not offer solutions that stick.

But drawing on the experiences of these three nations, Rodwin demonstrates that we can mitigate these problems with carefully planned reform and regulation.

He examines a range of measures that can be taken in the private and public sector to preserve medical professionalism-and concludes that there just might be more than one prescription to this seemingly incurablemalady.