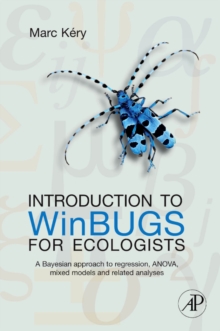 It offers an understanding of statistical models as abstract representations of the various processes that give rise to a data set.

Such an understanding is basic to the development of inference models tailored to specific sampling and ecological scenarios.

The book begins by presenting the advantages of a Bayesian approach to statistics and introducing the WinBUGS software.

It reviews the four most common statistical distributions: the normal, the uniform, the binomial, and the Poisson.

It describes the two different kinds of analysis of variance (ANOVA): one-way and two- or multiway.

It looks at the general linear model, or ANCOVA, in R and WinBUGS.

The GLM is then extended contain additional sources of random variation to become a generalized linear mixed model (GLMM) for a Poisson example and for a binomial example.

The first is the site-occupancy model for species distributions; the second is the binomial (or N-) mixture model for estimation and modeling of abundance.