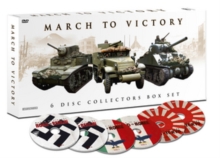 Triple bill of documentaries about the Second World War featuring wartime footage and interviews with those who survived the ordeal. 'Road to Berlin' offers an insight into the conflict which took place between 1939 and 1945 and ultimately led to the defeat of Nazi Germany. 'Road to Rome' focuses on the battles that took place between September 1943 and April 1945 in Italy. 'Road to Tokyo' pays particular attention to the battles fought in the Pacific Ocean between 1941 and 1945.