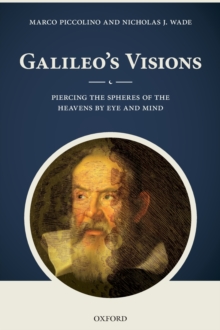 Galileo's Visions : Piercing the spheres of the heavens by eye and mind Hardback

Galileo is known as a pioneer of science - especially of mechanics and astronomy - but far less attention has been paid to his work on the senses generally, and more specifically on vision.

In this book, two experts on the history of science look at the novel ways in which Galileo looked at the heavens through his telescope, and, in the process, emphasised the importance of contrast phenomena and visual resolution for all observations.

He also described the sensesand perception in terms that found an echo in doctrines advanced by nineteenth century sensory physiologists.

In a fascinating and accessible style, Marco Piccolino and Nick Wade analyse the scientific and philosophical work of Galileo Galilei from the particular viewpoint of his approach to the senses (and especially vision) as a means of acquiring trustworthy knowledge about the constitution of the world.

For Galileo evidence from the senses was potentially ambiguous, hence reliable information capable of penetrating the complexity of reality could only be obtained by interpreting the sensory datacritically.

The philosophical background of Galileo's attitude to the senses was his awareness that nature had not developed a specific language aimed at communicating with senses generally and human senses in particular.

Galileo's analysis of the senses corresponded closely to a fundamental tenet ofmodern sensory physiology and psychophysics - the absence in the world of specific sensory signals like sounds, colours, tastes, and odours. Fully illustrated throughout, this book is an important contribution to psychology and the vision sciences, but more broadly to our knowledge of a pioneering figure in the history of science.