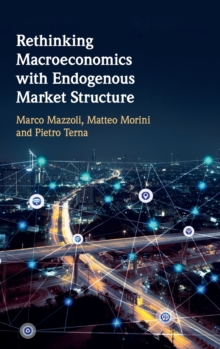 The birth and death of firms is one of the main features of the business cycle.

Yet mainstream DGSE macroeconomic models mostly ignore this phenomenon, thereby excluding any potential impact of economic policy on the probability of the birth and death of firms.

Those DGSE models that do allow for this phenomenon do so at the cost of drastic simplifications, which effectively rule out causal links between the strategic interaction of industrial firms and the macroeconomy.

This innovative new book develops a bottom-up, agent-based framework that shows how strategic interactions at the level of oligopolistic firms, and even at the level of individuals, affect entire industrial sectors and the equilibrium of the macroeconomy.

It will appeal to academic researchers and graduate students working in computational economics, agent-based modelling and econophysics, as well as mainstream economists interested in learning more about alternatives to DGSE models in macroeconomics.