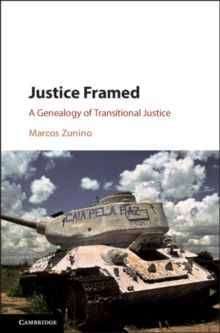 by Marcos (British Institute of International and Comparative Law) Zunino

Why are certain responses to past human rights violations considered instances of transitional justice while others are disregarded?

This study interrogates the history of the discourse and practice of the field to answer that question.

Zunino argues that a number of characteristics inherited as transitional justice emerged as a discourse in the 1980s and 1990s have shaped which practices of the present and the past are now regarded as valid responses to past human rights violations.

He traces these influential characteristics from Argentina's transition to democracy in 1983, the end of communism in Eastern Europe, the development of international criminal justice, and the South African truth commission of 1995.

Through an analysis of the post-World War II period, the decolonisation process and the Cold War, Zunino identifies a series of episodes and mechanisms omitted from the history of transitional justice because they did not conform to its accepted characteristics.