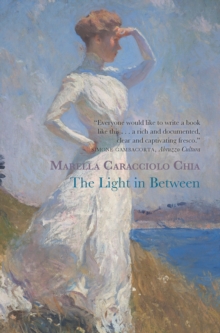 The Light in Between Paperback / softback

Marella Caracciolo Chia's The Light in Between chronicles the brief, intense love affair between Roman Princess Vittoria Colonna and Futurist painter Umberto Boccioni. This is the story of the tragically short-lived affair between the married Italian Princess Vittoria Colonna and the major Futurist painter Umberto Boccioni, who fell passionately in love during the First World War.

They met in June 1916, and their relationship was as intense as it was brief: only weeks later, Boccioni died during a cavalry training excercise, the last letter from Vittoria in his pocket.

Their fascinating correspondence - rediscovered after almost a century - is all that remains of the passionate love between a restless noblewoman and a tormented painter.

Through their letters, Chia not only tells the timeless story of a great love, but also fashions a compelling portrait of a remote world and time. 'Caracciolo Chia offers us a wonderful portrait not only of the intellectual exchange between an aristocrat and an artist, but also an insight into European society during the First World War and its cultural transition towards modernity: a rare and enjoyable combination'- IndependentMarella Caracchiolo Chia's The Light in Between is translated from the Italian by Howard Curtis, and published by Pushkin PressMarella Caracciolo Chia (b.1964) was born in Montreal and currently lives in Rome.

Among her other works are Il Giardino di Ninfa and Inside Rome.