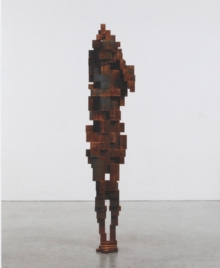 The book is made up of 10 classical sculptures from the Hermitage Museum (mostly Roman and one or two Greek), removed from their plinths and repositioned to share a raised floor with the viewer; and 17 highly abstracted body-forms by Antony Gormley.

The idea is to juxtapose ancient, idealized statues with Gormley's more disinterested sculptures and see whether, in Gormley's work, the abstract language of Euclidean geometry can make a shelter for feeling, and whether, in the case of the classical works, demounting and putting the viewer on the same level as their original makers can re-establish them as made things.

The interaction of the public, captured in documentary photographs, is key to a project that aims to show how classical marbles, Gormley's own sculptures and the living human visitors inhabit the same space and can converse with each other.

All Gormley's body works are the residue of an action or event of a real body that is absent translated into an abstract architectural language (which in the Hermitage is in acute contrast to the ornate interiors).

His work takes the body as a `found object', something already made, as a reflexive object that engages the viewer less as a representation than an acknowledgement of its opposite: the `lost subject'.