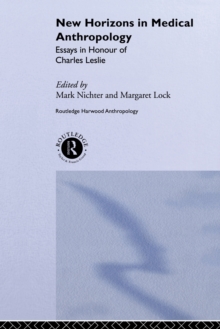 New Horizons in Medical Anthropology is a festschrift in honor of Charles Leslie whose influential career helped shape this subfield of anthropology.

This collection of cutting-edge essays explores medical innovation and medical pluralism at the turn of the 21st century.

The book accomplishes two things: it reflects recent research by medical anthropologists working in Asia who have been inspired by Charles Leslie's writing on such topics as medical pluralism and the early emergence of what has become a globalized biomedicine, the social relations of therapy management, and the relationship between the politics of the state and discourse about the health of populations, illness, and medicine.

The book also takes up lesser known aspects of Leslie's work: his contribution as an editor and the role he played in carrying the field forward; his ethics as a medical anthropologist committed to humanism and sensitive to racism and eugenics; and the passion he inspired in his co-workers and students. Charles Leslie is a remarkable and influential social scientist.

New Horizons in Medical Anthropology is a fitting tribute to a sensitive scholar whose theories and codes of practice provide an essential guide to future generations of medical anthropologists.