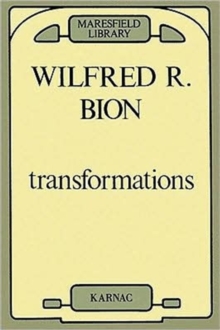 The Psychological Birth of the Human Infant : Symbiosis and Individuation Paperback / softback

The former is a dramatic, observable, and well-circumscribed event; the latter a slowly unfolding intra psychic process.'Thus begins this highly acclaimed book in which the author and her collaborators break new ground in developmental psychology and present the first complete theoretical statement of the author's observations on the normal separation-individuation process.

Separation and individuation are presented in this major work as two complementary developments.

Separation is described as the child's emergence from a symbiotic fusion with the mother, while individuation consists of those achievements making the child's assumption of his own individual characteristics.

Each of the sub-phases of separation-individuation is described in detail, supported by a wealth of clinical observations which trace the tasks confronting the infant and his mother as he progresses towards achieving his own individuality.