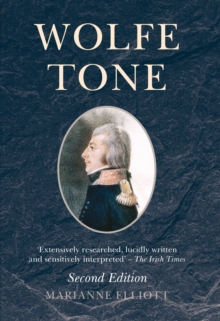 by Marianne (The Institute of Irish Studies, University of Liverpool) Elliott

Theobald Wolfe Tone (1763-1798) was the founder of Irish Republican nationalism.

As such his political ideas and the circumstances of his life and early death have become powerful political weapons in the hands of later nationalists.

Today his name still arouses strong passions and he is hailed as the first prophet of an independent Ireland. Published originally in 1989, Marianne Elliott's book was the first major biography of Tone, using a wealth of new material to examine his personal life and public actions.

Tracing him from his upbringing as a member of the Protestant elite, through his involvement in Irish radical politics, his exile in America, his secret negotiations with the French and return to Ireland with a French invasion force, to his trial for treason and his suicide while awaiting execution, it was a monumental publication that won numerous awards and gained much praise. This second edition brings this award-winning book up to date with new scholarship, new historical insights and fresh insights by Professor Marianne Elliott herself, making a crucial publication for all scholars and readers of Irish history.