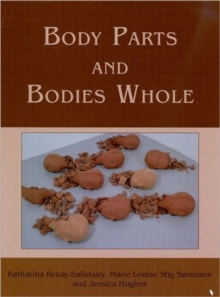 This volume grew out of an interdisciplinary discussion held in the context of the Leverhulme-funded project 'Changing Beliefs in the Human Body', through which the image of the body in pieces soon emerged as a potent site of attitudes about the body and associated practices in many periods.

Archaeologists routinely encounter parts of human and animal bodies in their excavations.

Such fragmentary evidence has often been created through accidental damage and the passage of time - nevertheless, it can also signify a deliberate and meaningful act of fragmentation.

As a fragment, a part may acquire a distinct meaning through its enchained relationship to the whole or alternatively it may be used in a more straightforward manner to represent the whole or even act as stand-in for other variables. This collection of papers puts bodily fragmentation into a long-term historical perspective.

The temporal spread of the papers collected here indicates both the consistent importance and the varied perception of body parts in the archaeological record of Europe and the Near East.

By bringing case studies together from a range of locations and time periods, each chapter brings a different insight to the role of body parts and body wholes and explores the status of the body in different cultural contexts. Many of the papers deal directly with the physical remains of the dead body, but the range of practices and representations covered in this volume confirm the sheer variability of treatments of the body throughout human history.

Every one of the contributions shows how looking at how the human body is divided into pieces or parts can give us deeper insights into the beliefs of the particular society which produced these practices and representations.