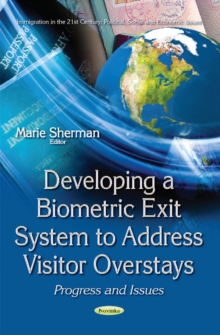 Each year, millions of visitors come to the United States legally on a temporary basis.

Overstays are individuals who were admitted legally on a temporary basis but then overstayed their authorized periods of admission.

The Intelligence Reform and Terrorism Prevention Act of 2004 required the Secretary of Homeland Security to develop a plan to accelerate implementation of a biometric entry and exit data system that matches information provided by foreign nationals upon their arrival and departure.

Since 2004, the Department of Homeland Security (DHS) has tracked foreign nationals entries into the United States, and since December 2006, a biometric entry capability has been fully operational at all ports of entry.

However, the United States Government Accountability Office (GAO) has identified a range of challenges that DHS has faced in its efforts to deploy a corresponding biometric exit capability.