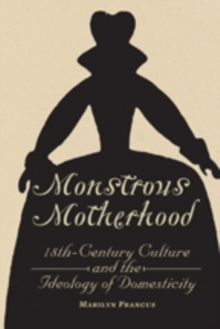 Monstrous Motherhood : Eighteenth-Century Culture and the Ideology of Domesticity Hardback

Although credited with the rise of domesticity, eighteenth-century British culture singularly lacked narratives of good mothers, ostensibly the most domestic of females.

With startling frequency, the best mother was absent, disembodied, voiceless, or dead.

British culture told tales almost exclusively of wicked, surrogate, or spectral mothers-revealing the defects of domestic ideology, the cultural fascination with standards and deviance, and the desire to police maternal behaviors.

If domesticity was so important, why is the good mother's story absent or peripheral?

What do the available maternal narratives suggest about domestic ideology and the expectations and enactment of motherhood?

She exposes the mechanisms of maternal marginalization and spectralization in eighteenth-century culture and revises the domesticity thesis. Monstrous Motherhood will compel scholars in eighteenth-century studies, women's studies, family history, and cultural studies to reevaluate a foundational assumption that has driven much of the discourse in their fields.