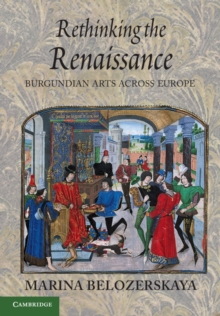 In this study, Marina Belozerskaya re-establishes the importance of the Burgundian court as a center of art production and patronage in early modern Europe.

Beginning with a historiographical and theoretical overview, she offers an analysis of contemporary documents and patterns of patronage, demonstrating that Renaissance tastes were formed through a fusion of international currents and art works in a variety of media.

Among the most prestigious were those emanating out of the Burgundian court, which embodied prevailing contemporary values: magnificence in appearance, ceremony and surroundings, chivalry inspired by Greco-Roman antiquity, and power manifested through ingenious ensembles of luxury arts.

The potency of this 'Burgundian mode' fostered a pan-European demand for its arts and their creators, with rulers in England, Germany, Spain and Italy itself eagerly acquiring Burgundian art works.

This interdisciplinary study of the Burgundian arts provides a new paradigm for further inquiry into the pluralism and cosmopolitanism of the Renaissance.