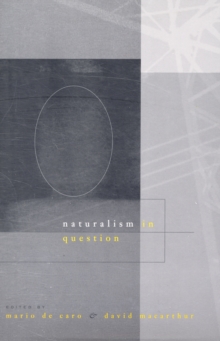 Today the majority of philosophers in the English-speaking world adhere to the "naturalist" credos that philosophy is continuous with science, and that the natural sciences provide a complete account of all that exists--whether human or nonhuman.

The new faith says science, not man, is the measure of all things.

However, there is a growing skepticism about the adequacy of this complacent orthodoxy.

This volume presents a group of leading thinkers who criticize scientific naturalism not in the name of some form of supernaturalism, but in order to defend a more inclusive or liberal naturalism. The many prominent Anglo-American philosophers appearing in this book--Akeel Bilgrami, Stanley Cavell, Donald Davidson, John Dupre, Jennifer Hornsby, Erin Kelly, John McDowell, Huw Price, Hilary Putnam, Carol Rovane, Barry Stroud, and Stephen White--do not march in lockstep, yet their contributions demonstrate mutual affinities and various unifying themes.

Instead of attempting to force human nature into a restricted scientific image of the world, these papers represent an attempt to place human nature at the center of renewed--but still scientifically respectful--conceptions of philosophy and nature.