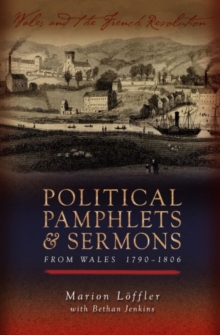 Pamphleteering was a vital component of the popular political discussion opened up by the French Revolution of 1789, but while the English pamphlet wars have been exhaustively explored, Welsh pamphlet literature has been ignored.

During the fifteen years following the French Revolution of 1789, over 100 Welsh pamphlets and sermons engaged in a public discourse which discussed the larger issues raised by the Revolution and the war against the French Republic.

This pioneering volume seeks to capture the excitement of the period by demonstrating how radicals and loyalists, Dissenters, Methodists and Churchmen, pacifists and warmongers engaged in a lively argument in their published works.

An in-depth essay reviews and interprets texts written by artisans, Dissenting ministers, country curates and Anglican bishops, who all used religion as politics; promoted war or peace; argued over republicanism and loyalism, and utilized the law as a stage for political ideas.

All texts are fully translated and thus made accessible to an English-speaking audience for the first time.