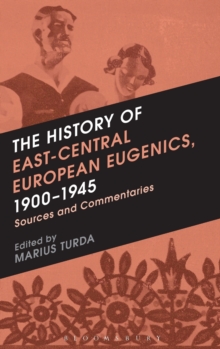 The History of East-Central European Eugenics, 1900-1945 : Sources and Commentaries Hardback

It includes 100 primary sources translated from the East-Central European languages into English for the first time and key contributions from leading scholars in the field from around Europe.

This volume examines the main eugenic organisations, as well as individuals and policies that shaped eugenics in Austria, Poland, the former Czechoslovakia, the former Yugoslavia, Hungary and Romania.

It also explores the ways in which ethnic minorities interacted with national and international eugenics discourses to advance their own aims and ambitions, whilst providing a comparative analysis of the emergence and development of eugenics in East-Central Europe more generally.

Complete with a glossary of terms, a list of all eugenic societies and journals from these countries, as well as a comprehensive bibliography, The History of East-Central European Eugenics, 1900-1945 is a pivotal reference work for students, researchers and academics interested in East-Central Europe and the history of science and national identity in the 20th century.