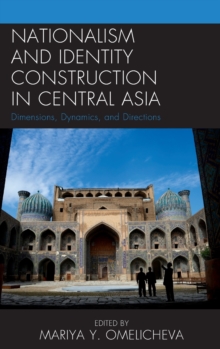 More than two decades after the break-up of the Soviet Union, Central Asian republics-Kazakhstan, Kyrgyzstan, Tajikistan, Turkmenistan, and Uzbekistan-continue to reexamine and debate whom and what they represent.

Nationalism and Identity Construction in Central Asia explores the complex and controversial process of identity formation in the region using a "3D" framework, which stands for "Dimensions", "Dynamics," and "Directions" of nation building.

The first part of the framework-dimensions-underscores the new and complex ways in which nationalisms and identities manifest themselves in Central Asia.

The second part-dynamics-is premised on the idea that nationalisms and identity construction in the Central Asian republics may indicate some continuities with the past, but are more concerned with legitimation of the present power politics in these states.

It calls for the identification of the main actors, strategies, tactics, interests, and reactions to the processes of nationalism and identity construction.

What unites these works is their shared modern and post-modern understanding of nations, nationalisms, and identities as discursive, strategic, and tactical formations.

They are viewed as "constructed" and "imagined" and therefore continuously changing, but also fragmented and contested.