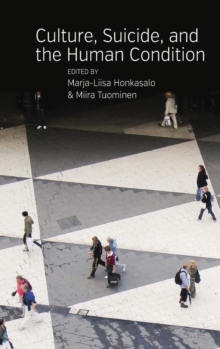 Suicide is a puzzling phenomenon. Not only is its demarcation problematic but it also eludes simple explanation.

The cultures in which suicide mortality is high do not necessarily have much else in common, and neither is a single mental illness such as depression sufficient to lead a person to suicide.

In a word, despite its statistical regularity, suicide is unpredictable on the individual level.

The main argument emerging from this collection is that suicide should not be understood as a separate realm of pathological behavior but as a form of human action.

As such it is always dependent on the decision that the individual makes in a cultural, ethical and socio-economic context, but the context never completely determines the decision.

It also argues that cultural narratives concerning suicide have a problematic double function: in addition to enabling the community to make sense of self-inflicted death, they also constitute a blueprint depicting suicide as a solution to common human problems.