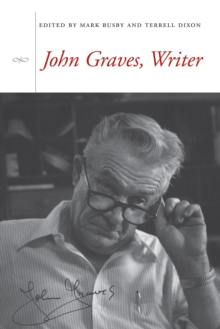 Runner-up, Violet Crown Award, Writer's League of Texas, 2008Renowned for Goodbye to a River, his now-classic meditation on the natural and human history of Texas, as well as for his masterful ability as a prose stylist, John Graves has become the dean of Texas letters for a legion of admiring readers and fellow writers.

Yet apart from his own largely autobiographical works, including Hard Scrabble, From a Limestone Ledge, and Myself and Strangers, surprisingly little has been written about Graves's life or his work.

John Graves, Writer seeks to fill that gap with interviews, appreciations, and critical essays that offer many new insights into the man himself, as well as the themes and concerns that animate his writing. The volume opens with the transcript of a revealing, often humorous symposium session in which Graves responds to comments and stories from his old friend Sam Hynes, his former student and contemporary art critic Dave Hickey, and co-editor Mark Busby.

Following this is a more formal interview of Graves by Dave Hamrick, who draws the author out on issues relating to each of his major works.

Erickson, Bill Harvey, and James Ward Lee speak to the powerful influence that Graves has had on fellow writers. In addition to these personal observations, nine scholars analyze essential aspects of Graves's work.

These include the place of Goodbye to a River within environmental literature and how its writing was a rite of passage for its author; Graves as a prose stylist and a literary, rather than polemical, writer; the ways in which Graves's major works present different aspects of a single narrative about our relationship to the land; the question of gender in Graves's work; and Graves's sometimes contentious relationship with Texas Monthly magazine.

Mark Busby introduces the volume with a critical overview of Graves's life and work, and Don Graham concludes it with a discussion of Graves's reception and literary reputation.

A bibliography of works by and about Graves rounds out the book. John Graves, Writer confirms Graves's stature not only within Texas letters, but also within American environmental writing, where Graves deserves to be more widely known.