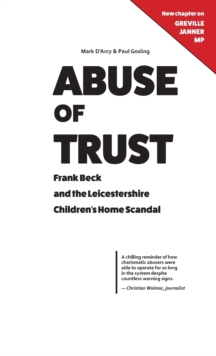 'Few books have managed to get to the heart of a story of abuse as thoroughly and accurately as Abuse of Trust.' - CHRISTIAN WOLMAR, JOURNALIST AND AUTHOR'An important and in-depth analysis' - DR LIZ DAVIES, LONDON METROPOLITAN UNIVERSITY, UKFor the first time in 18 years, the definitive account of one of Britain's worst child abuse scandals is re-published - with a new chapter looking at the role of the Labour MP Greville Janner. Frank Beck sexually and physically abused more than 200 children while working as a residential care home manager for Leicestershire County Council.

This book shows how he got away with it, after gulling social workers and council managers.

Hundreds of children in the care of the local authority were damaged, and some tragically died.

One is suspected, now, of being murdered. Janner, a lawyer, backbencher and influential figure in Labour, repeatedly avoided prosecution for his involvement in the Leicestershire care scandal, despite being named as an abuser during the criminal case against Beck. In an epilogue to this new, enlarged edition of this acclaimed book on the scandal, Paul Gosling deals with Janner's dominance of the local Labour Party, his influence within the wider parliamentary party and the failed police investigations into him.

Abuse of Trust, first published in 1998, has long been viewed by social work professionals as an important audit of this case.

Gosling and the BBC journalist Mark D'Arcy, his co-author, investigate how Beck and his cronies came to rampage through children's homes in Leicestershire for more than a decade.