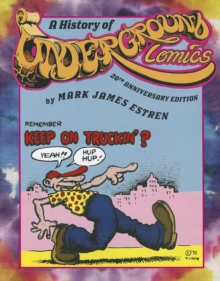 This is the first and most comprehensive look at the underground cartoonists and their work - lavishly illustrated, including comments and drawings by the cartoonists themselves and by members of the earlier generation that most influenced them.

It includes the full story of the notorious obscenity trial of Zap No. 4 including the panels. In the land that time forgot, 1960s and 1970s America (Amerika to some), there once were some bold, forthright, thoroughly unashamed social commentators who said things that "couldn't be said" and showed things that "couldn't be shown." They were outrageous - hunted, pursued, hounded, arrested, busted, and looked down on by just about everyone in the mass media who deigned to notice them at all.

They were cartoonists - underground cartoonists. And they were some of the cleverest, most interesting social commentators of their time, as well as some of the very best artists, whose work has influenced the visual arts right up until today. "A History of Underground Comics" is their story - told in their own art, in their own words, with connecting commentary and analysis by one of the very few media people who took them seriously from the start and detailed their worries, concerns and attitudes in broadcast media and, in this book, in print.